Founded over seventy years ago to bring tourism to the city of Miami, the Orange Bowl Committee (OBC) each year hosts the nationally televised Orange Bowl football game on New Year’s Day. In 1990, OBC extended to Federal Express the honor of being the first Title Sponsor in Orange Bowl history.

The new Orange Bowl identity contemporizes the New Year football classic and is stylistically consistent with the revitalized FedEx image. A branding matrix allows sponsors, licensees and suppliers systematic graphic connection with OBC appropriate to their respective contributions. Promotional graphic standards provide accurate reproduction of the FedEx Orange Bowl signature and contributes to impeding its unauthorized or inappropriate use. 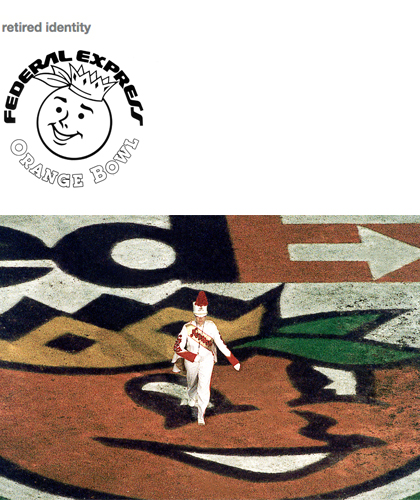 [Lindon] seems to work deftly from both sides of his brain—he’s as good at strategy as he is at design. What’s more, he understands business and looked for ways to help us improve operational efficiency in managing our brand internally.